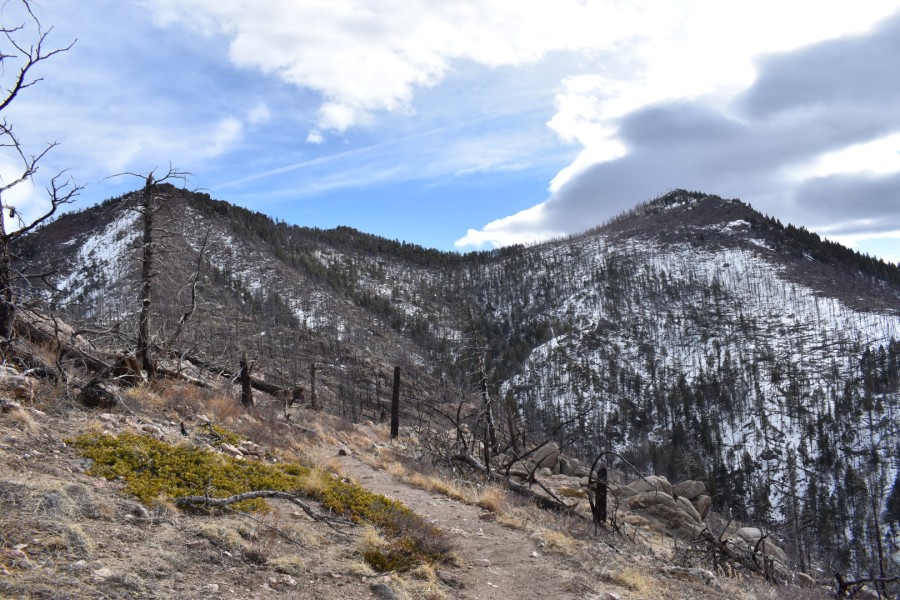 There are a handful of peaks above Boulder that are commonly climbed. I’d climbed all 5 within the past few years, but my friend Allie wanted to catch up and snag some she hadn’t done yet. Most are pretty tough but a few offer an alternate route that is a bit easier. Bear and South Boulder Peaks are the easiest to do together, and Allie found an alternate route that would save us considerable mileage and elevation gain. I was happy with avoiding ascending 3,500′ if at all possible, so there was no argument from me!

We parked my car at the South Mesa Trailhead, our ending point and the standard starting point for South Boulder Peak. Since parking isn’t allowed where we were planning on starting our hike, Allie’s boyfriend dropped us off. This would be a point to point hike, meaning we’d start at one spot and end at a completely different spot. Fun!

Almost immediately we connected with the West Bear Peak Trail, which would take us all the way to our first summit. All of the trails here are well marked and well maintained, so it’s pretty easy to figure out where you’re going, but we always have electronic maps with us just in case!

The trail started out in the forest, soon climbing into an open area with views of Bear and South Boulder Peaks. The Flagstaff Fire of 2012, started by lightning, burned 300 acres in this area before it was contained.

So far the trail had been pretty gradual, but it steepened as soon as we neared Bear Peak. We stopped to take a lot of pictures along this stretch, not only because the views were awesome, but because our legs and lungs couldn’t keep up.

We made surprisingly good time, ascending Bear Peak in about an hour and a half (that must be a record for us)!

The scramble at the top of Bear Peak was more difficult than I remembered. I think the patches of ice and snow added a new component that I wasn’t quite ready for. But Allie coaxed me up and we had a snack while enjoying the beautiful weather and great views.

Getting back down Bear Peak was another story, and I had even more difficulty coming down one particularly sketchy move than I did going up. After a few minutes of working myself up to it, I finally made it back to level ground and we quickly made our way to the saddle between Bear and South Boulder Peaks. This section was pretty gradual, but the ascent up South Boulder was decently steep. After probably 100 breaks, we made it to the summit! Some guys were hanging out on the “true” summit, so we scrambled up some slightly lower boulders and had our own private area for yet another snack break.

Now all we had left to do was go down…and down…and down. We avoided the 3500′ of ascent but that didn’t mean we could avoid it on the way down. And it definitely took a toll on our knees. Much of the trail consists of uneven boulder “steps”, which makes for slow going. Once out of the burn area, we descended into forest. We kept ourselves occupied by watching for neat rock formations and old cabins, both plentiful.

Most of the cabins had no interpretive signage so we had no idea what we were looking at, but I found a fun brochure when I got home if you’d like to read more! Jessie Stockton (see above photo) homesteaded this land in 1910. She is one of the few women homesteaders that I’ve found cabin remnants! (They were usually men or families.) We also passed the McGillvray Cabin (not pictured), which is estimated to have been built between 1870-1885.

One rock formation we were looking for is called the Devils Thumb. We saw two formations that could fit. Which do you think looks more like a thumb? Or did this devil perhaps have two thumbs?

We’d gotten such a late start that the sun was setting on our way out, but we had just enough light to visit one final homestead. This one had a great sign describing the history of the home as well as some surrounding features we hadn’t even noticed! Super fun to try to spot distant rock walls and imagine what life must have been like here in the late 1800s.

I was sore for about 4 days after this hike (so much downhill!) but it’s such a fun way to experience two summits, multiple historical sites, multiple ecosystems, and amazing views. Maybe one day I’ll come back yet again.