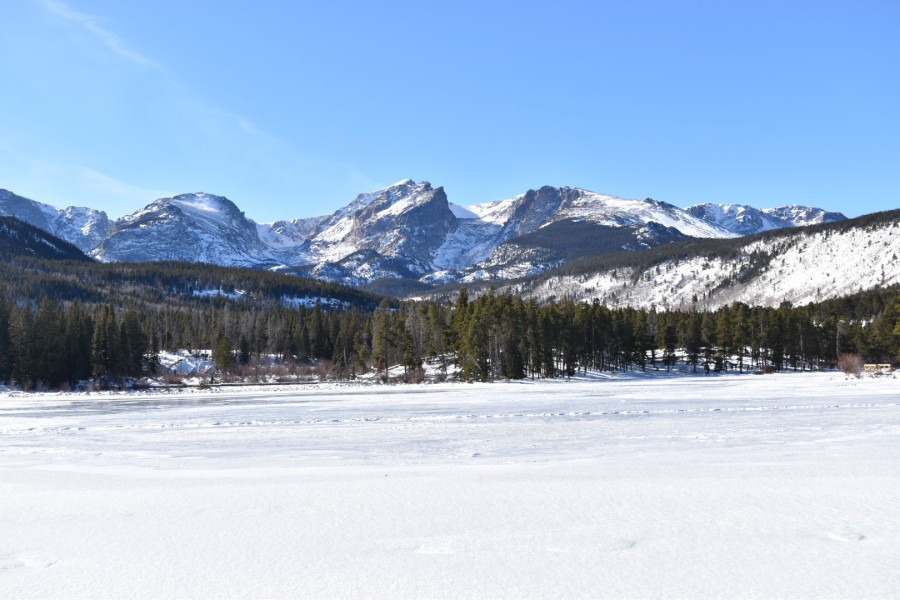 Kyle and I haven’t spent much time in Rocky Mountain National Park in the winter, but it seemed like a great place to spend a beautiful (almost) winter afternoon. I have a long list of hikes that I want to do one day, many of which are in Rocky, and some of which are so short that it makes the most sense to combine them and do multiple in one day.

Our first stop was Sprague Lake. I always pass the Sprague Lake turn off when heading down to the Bear Lake & Glacier Gorge Trailheads, but I had never thought to stop. But I’d like to do all (or at least most) of the trails in Rocky one day, and this one was on the list. I’ll admit I wasn’t expecting much. Short, accessible, flat…maybe also boring?

I imagined hoards of people and difficulty finding a parking spot, but the lot was probably only half full when we arrived at 12:30. Thank you winter! Recent storms dumped a good amount of new snow and extreme wind gusts the day before seemed to have kept most people out of the park. No problem for us!

We put on our micro-spikes and followed the snowy path around the lake. Most of the trail was well packed down and easy to follow. The initial views of the lake weren’t anything too special, though the hike was peaceful and it was surprisingly warm out.

Sprague Lake was named for Abner Sprague, who operated a resort lodge on the lake from 1910-1940 with his wife Alberta. Right before Rocky became a National Park in 1915, Sprague dammed the lake, increasing its size to 13 acres and improving the fishing for his guests. Near the lake’s outlet, we spotted a large cutthroat trout (and a few smaller ones) through an opening in the ice.

The views along the east edge of the lake were by far the best of the hike, and absolutely worth the short walk.

Rejuvenated after our surprisingly beautiful hike around Sprague Lake (and gorgeous weather!), we moved on to our next hike, Bierstadt Lake!

Just down the road from the Sprague Lake Trailhead is the trailhead for Bierstadt Lake. Kyle and I had actually intended on hiking this trail in the past, but the tiny lot had always been full. Luckily, the parking lot was almost empty when we arrived around 1pm. The hike to Bierstadt Lake would prove to be more difficult than our short walk around Sprague Lake, but we welcomed the exercise.

I wouldn’t normally complain about only 600′ of elevation gain, but snow adds an entirely new dimension to hiking. I’m definitely not used to hiking in snow! In winters past, I’ve avoided snowy travel most of the time, electing instead to wait until lower elevation trails are melted out. But I don’t intend on doing that this winter! I need to keep increasing my stamina.

The forest was beautiful and I enjoyed the hike even though snow was involved. The trail had been packed down some, but wasn’t nearly as heavily used as the Sprague Lake Trail, so we post holed here and there and slopped around the rest of the time.

The trail ascended a steep hillside and then switch-backed numerous times across the face. As we climbed, the forest gave way to an open area filled with sagebrush, something I didn’t know grew in Rocky! The sun melted the snow in the open area into ice, and we found our micro-spikes to be extremely helpful here.

The views from this slope were amazing and I stopped constantly to take yet another photo. Numerous trees were down across the trail, and Kyle moved the smaller ones out of the way.

When we reached the top of the slope, we plunged back into the forest and then descended to the lake.

Bierstadt Lake looked smaller than I anticipated, but we decided to follow the trail around the lake anyways. Shortly after starting along the loop, the trench we were following became a ski track and we got sick of post holing every step so we cut over to the lake and walked on the ice instead. Now the lake looked much bigger, and as we made our way around, we saw the views that bring people here.

Like the well-known Colorado 14er Mount Bierstadt, Bierstadt Lake is named for Albert Bierstadt, a famous landscape painter of the 1800s. I imagined him sitting on the shores of this lake (probably in summer) and painting for hours.

The ice made me nervous, like it always does, but proved to be very solid and we walked clear across the lake. We found some interesting icy footsteps, interesting in that the footsteps were raised above the surface of the lake.

By the time we got back to the car, we were ready to head home so we opted to save the last short hike on my list for another day.