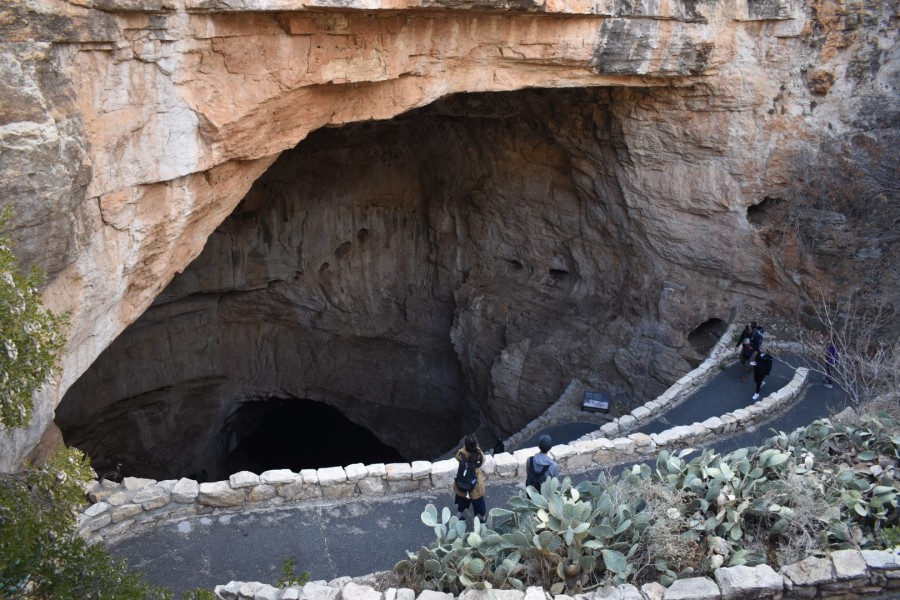 After a big day in Guadalupe Mountains National Park, Allie and I continued on to Whites City, NM, our hotel, and a much-needed hot meal. We were excited to visit Carlsbad Caverns National Park in the morning. It was only upon our arrival to our hotel that we learned that we should have pre-purchased tickets for the self-guided cave tour. Of course there weren’t any tickets remaining for the next day, but the lovely hotel owners gave us a tip that the rangers would let us in if we arrived before they opened at 7am. About two weeks prior, I had called the park to see if we needed to buy tickets in advance. The lady snottily informed me that of course they don’t sell tickets in advance (duh) so we thought we were good to go. The hotel owners went on to explain that the National Park had rolled out the ticketing system last minute and didn’t advertise it well, but since visitors put up such a stink about it, the park was letting people in as long as they were in line by 7am.

We woke up early and made the short drive into Carlsbad Caverns National Park. We watched the sun rise and saw what we thought were desert bighorn sheep along the side of the road.

Since we wanted to get up to the caves and get in line before 7am (with all the other ticketless people) we skipped the overlooks and interpretive stops along the road and drove straight to the Visitor Center. There weren’t many cars around but a line was already forming at 6:15. Allie saved our place in line while I checked out a short nature trail.

The Chihuahuan Desert Nature Trail starts at the eastern side of the parking lot and forms a short 1-mile loop. Signs along the trail identify native plant species. I didn’t want to leave Allie for long so I didn’t finish the entire trail, but I did walk out to a nice overlook. It was beautiful in the early morning light.

At 7am a ranger opened the doors and the now very long line moved inside to purchase tickets. Since I had an America the Beautiful pass, we got both tickets (normally $10/each) for free. Our tour, even though it’s self-guided, didn’t start for a little while so we took some time to explore the museum and purchase the audio tour ($5/each). We found the audio tour to be well worth the money and were glad we’d purchased it.

We were a few minutes late to our timeslot so we were separated from the main group. This worked to our favor as we enjoyed much of our time in the cave by ourselves. We wanted to take our time to read the signs, listen to the audio tour, and enjoy the experience. This cave is truly awesome.

Descending into the natural entrance was an experience I will never forget. I can’t even imagine the first explorers climbing down into the cave with ladders and lanterns. The Natural Entrance Trail descends to the Big Room, the main cave chamber. There were cave formations and audio tour stops all along the descent, but the most famous formations were 750 feet below the surface.

I’ve included a number of photos I took while in the cave. Even though the passages are well-lit, my camera had a hard time focusing and I didn’t end up with many great pictures. I’ve included some of my favorites here, but these do absolutely no justice to show how truly spectacular this cave is.

After more than four hours exploring the cave, we were excited to eat at the cave’s café 750 feet below the surface. Unfortunately this was closed (probably due to Covid) and we joined the long line to ride the elevator to the surface. Thankfully the main café was open so we grabbed lunch there and wandered around the huge gift shop. Once we had enough of the touristy stuff, we drove around the park and stopped at a few overlooks and interpretive stops.

An 1/8-mile trail leads to an alcove used by ancient travelers hundreds and perhaps even thousands of years ago. The rock shelter provided a safe, dry, and warm place to rest.

After our short time at Carlsbad Caverns, it was time to make the 3.5 hour drive to our next destination, White Sands National Park.