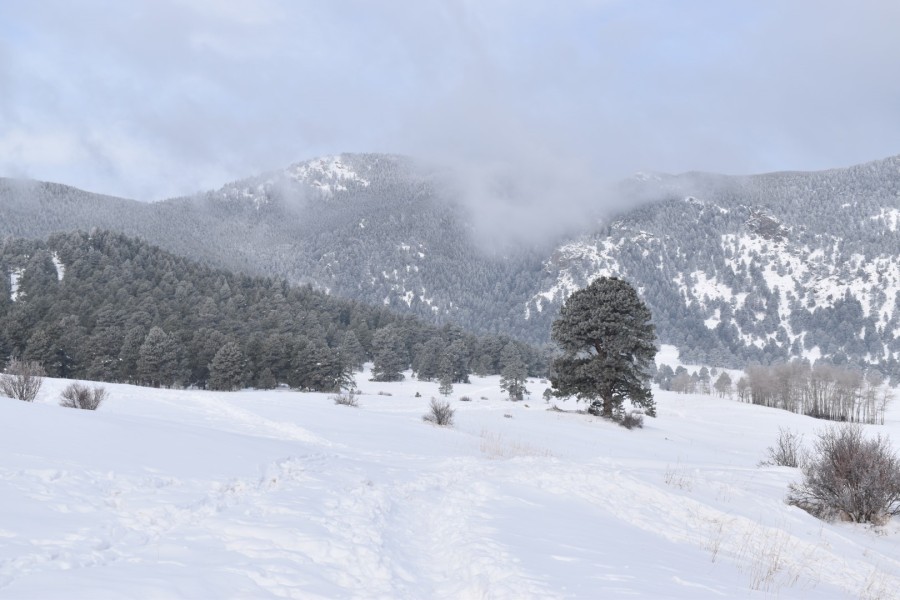 Diana and I had planned a weekday summit of Bergen Peak (9,701′) near Evergreen. Both of us had climbed Bergen before (though in summer) and while we knew the mountains had gotten quite a bit of snow recently, we figured Elk Meadow Park was busy enough that the trails would be trenched in by the time we arrived. We parked at the Lewis Ridge Trailhead and set out on the Sleepy S Trail, into a winter wonderland.

The Sleepy S Trail was nicely trenched in and we followed the bootpack through the meadow, assuming that we were on a trail and heading in the right direction. Eventually we realized we were going the wrong way. After double checking our map, we realized we weren’t on a trail at all, but simply following someone else’s aimless wanderings. Dang. In order to get to the actual trail, we needed to head west through about 0.3 miles of fresh snow.

We reached the Meadow View Trail, and once again on bootpack, we set off up the Too Long Trail, one of two trails that head up Bergen Peak. Our trench abruptly ended about two minutes later and we had to decide if we were feeling ambitious enough to break trail ourselves. We were still 3.4 miles and 1700′ below the summit and neither of us were really prepared to trench through 8-12″ of snow for that long. I think we were both kind of annoyed at the situation but ultimately decided against a miserable time, instead opting to turn around and loop around the meadow.

We backtracked down to the Meadow View Trail and followed it south, back towards the trailhead. We found a great trench the entire way, and the trail even dipped into the forest for a while, offering a bit of a scenery change from the open meadow. In a last ditch effort, we attempted to follow the Bergen Peak Trail (the second trail to the summit). We again started out on bootpack which soon fizzled out. Oh well, it was worth a try. We followed the Meadow View Trail around the south side of the park and back to the Sleepy S Trail, which we took back to the trailhead.

After only a 5 mile hike (instead of our planned 11 miles), we took some time to brainstorm if we wanted to do anything else. We ultimately decided on 8,284′ Genesee Mountain, a peak just east of Evergreen and more or less on the way home.

Genesee Mountain was a good choice. The route is short and easy, so even if we had to break trail, it wouldn’t take a ton of effort. However, we found that the trails on Genesee Mountain had seen quite a lot of traffic and we had an easy go of it. The summer trailhead was gated so we parked along the road and walked in.

We followed the road to the summer trailhead where we then turned off on the Genesee Summit Trail.

The summit is only 0.4 miles from the summer trailhead, and we made very quick time. Despite the numerous tracks and evidence of people, we didn’t see a single person and had the summit to ourselves.

While it wasn’t our planned hike up Bergen Peak, these two hikes combined made us feel like we at least got some exercise and out into nature. Maybe next winter we will have better luck making it up Bergen Peak.