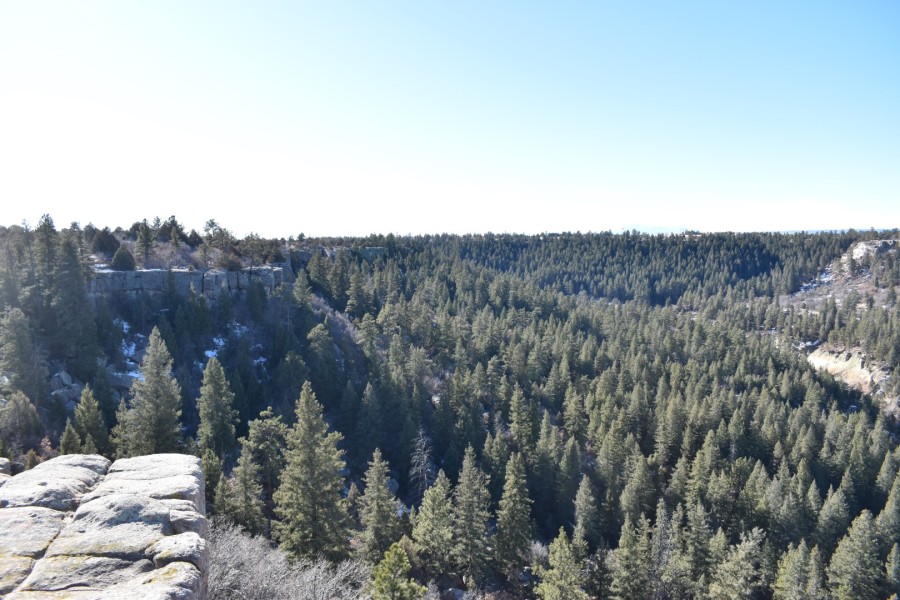 On the plains just south of Franktown, CO, hidden among the low hills and prairie grasses, a forested canyon awaits exploration. Invisible until you’re right up on it, Castlewood Canyon is an unexpected sight, out of place in an area that is seemingly just grassland. Cherry Creek has been slowly carving this canyon for millions of years, creating a unique ecosystem; an oasis of forested cliffs in the middle of the prairie.

My Colorado State Parks pass was expiring at the end of January and I wanted to see one last state park. Castlewood Canyon was at the top of the list with its unique ecosystem, miles of trails, and tons of human history (i.e. ruins). Allie was easy to convince but more difficult was choosing from more than 13 miles of trails. We ultimately settled on a figure-8 loop that would visit two historic sites and offer views from both the top and bottom of the canyon.

There are entry points on either side of the park and multiple parking areas. We entered from the Main Park Entry on the east side and parked at the farthest lot, Canyon Point. Our loop began on the Lake Gulch Trail, which wraps around Canyon Point as it gradually descends into Lake Gulch and then Castlewood Canyon. The slow descent was a nice and easy warm-up.

After crossing Cherry Creek, we hopped on the Inner Canyon Trail just briefly before reaching the Castlewood Dam. The Castlewood Dam was built in 1890 to store irrigation water for the surrounding agricultural land. It measured 83 feet thick at the base, 65 feet tall, and 630 feet long. Built of rock blocks blasted from the canyon’s walls, it held back the 200-acre Castlewood Reservoir. Almost immediately after the dam was finished, a committee of Denver citizens protested with concerns about the the dam’s safety. Just one year after construction, the state engineer found the dam was built on inadequate footings. The dam often washed out, and while the leaks were repaired, new leaks always sprung up.

In early August 1933, the area received unprecedented amounts of rain. By August 3rd the reservoir was full. The dam caretaker opened the flood gates and felt the dam tremble. He quickly scrambled to safety. At 1:20 am, the dam broke, releasing a 15 foot wall of water into the canyon. The surge carried with it tons of debris, livestock, and boulders. The dam caretaker and others alerted those downstream in Castle Rock, Parker, and Denver. Their quick actions saved many lives. The second worst flood in Denver’s history, the Castlewood Dam break killed two people, washed out six bridges, flooded Union Station in downtown Denver, and caused one million dollars in property damage. The remnants of the dam stand as a reminder of the past.

It’s difficult to not feel the power of water when looking up at the crumbling dam. But with damage comes regrowth, and while the canyon was scoured from the flood, it is slowly healing. We began a short climb up the Rimrock Trail, above the dam and around the north rim of Castlewood Canyon.

The Rimrock Trail follows the canyon rim for about 1.5 miles with numerous scenic overlooks. Castlewood Canyon is pretty small and we soon reached its end, where the trail switchbacked down to the bottom.

At the bottom, we crossed Cherry Creek a second time and then took the short Homestead Trail. This trail wraps around the 1894 Lucas homestead. Patrick and Margaret Lucas raised eight children on their 160-acre homestead. Numbered signs identify the remaining foundations as barns and outbuildings but the star of the show is the unusual concrete house.

There is parking near the homestead (you certainly don’t need to walk 8 miles to visit it) and a nice picnic table where we sat to eat our lunch. Next, we followed the Creek Bottom Trail back through the canyon to the dam. This trail was often far above the creek and offered few views (so much for Creek Bottom). Mid-way there is a nice overlook of a small waterfall and evidence of the 1933 flood.

We somehow missed the turn-off for the Dam Trail, which goes up and around the top of the dam. By the time we realized this, we didn’t feel like backtracking so we decided to save it for next time. Past the dam, we continued on the Inner Canyon Trail. There were people everywhere through here; playing in the creek, flying drones, and just generally making a ton of noise. My lack of pictures through this section may have been due to a sheer desire to get away from all that activity!

The end of the Inner Canyon Trail climbs steeply to the top of the canyon and back to the parking area. There were so many people descending that we were constantly stopping to let person after person go by. Eventually we escaped the bottleneck and decided to explore the Canyon View Nature Trail. This is a network of wheelchair-accessible trails just off the parking lot that lead to various canyon overlooks. We stopped at a few overlooks and finished in the Visitors Center, which had a few small exhibits.

We walked the road back to the car and finished with just under 9 miles of hiking. This was a great loop and I believe we saw the best of what Castlewood Canyon State Park has to offer.