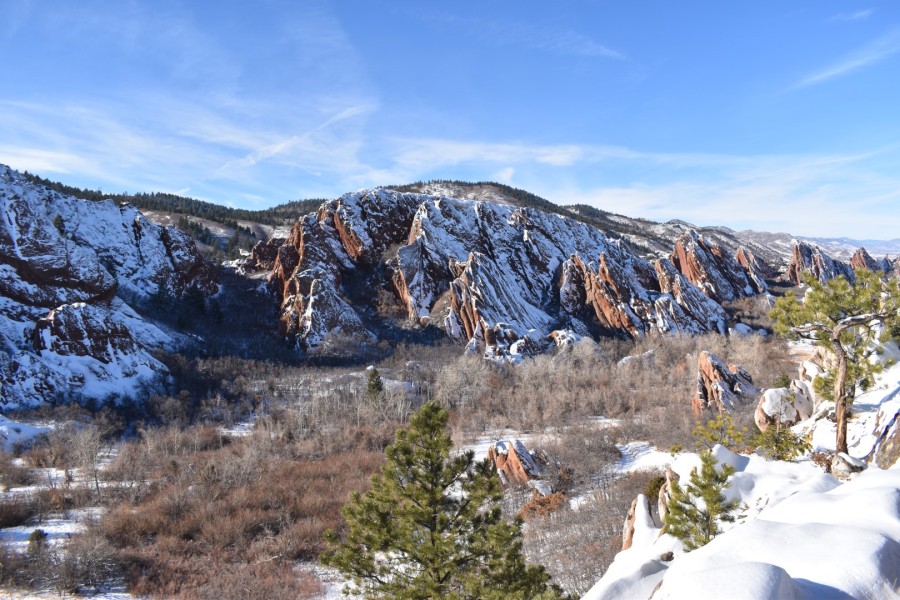 After a fresh December snow, I traveled down to Roxborough State Park to hike a short loop through the red sandstone formations. It was a beautiful afternoon and there were plenty of families enjoying the easy Fountain Valley Loop. The Fountain Valley Trail heads north from the Visitor Center on what was once a road.

The wide trail is perfect for social distancing and the loop was designated (and very clearly marked) as one-way, though not everyone seemed to notice or care. I hiked the correct way around the loop, counter-clockwise.

The eastern half of the loop doesn’t have any rock formations, but there is a pretty meadow where I happened upon a herd of mule deer.

The Lyons Overlook is the first of two overlooks along the Fountain Valley Loop. This spur trail climbs about 60′ to an awesome viewpoint overlooking the red sandstone formations.

Even though the main loop was busy, I was the only one at the overlook. The views were great, some of the best views of the day.

Back on the main trail, I continued north to the Persse Place.

Henry Persse moved to what was once called Washington Park (named for the sandstone formation below) from New York in 1888. He had dreams of owning a grand resort, and by 1910 had erected at least 8 buildings including the stone house (above), guest houses, and various outbuildings. This spot was a favorite among Denver’s elite, and the name of the property was eventually changed to Roxborough Park after Henry’s ancestral home in Ireland. His dream of building a grand resort abruptly ended when he was killed by a Denver streetcar in 1918.

From Persse Place, I continued around the west side of the loop. This is the most scenic half of the loop since it travels through the sandstone formations.

On my way out, I stopped at the Fountain Valley Overlook. This trail was shorter and easier than the Lyons Overlook but it was surrounded by scrub oak and didn’t have as great of views.

Overall, I thought this was a nice loop. It really packs in quite the scenery in just 3 easy miles, and the addition of the overlooks was a fun way to see a bit more.