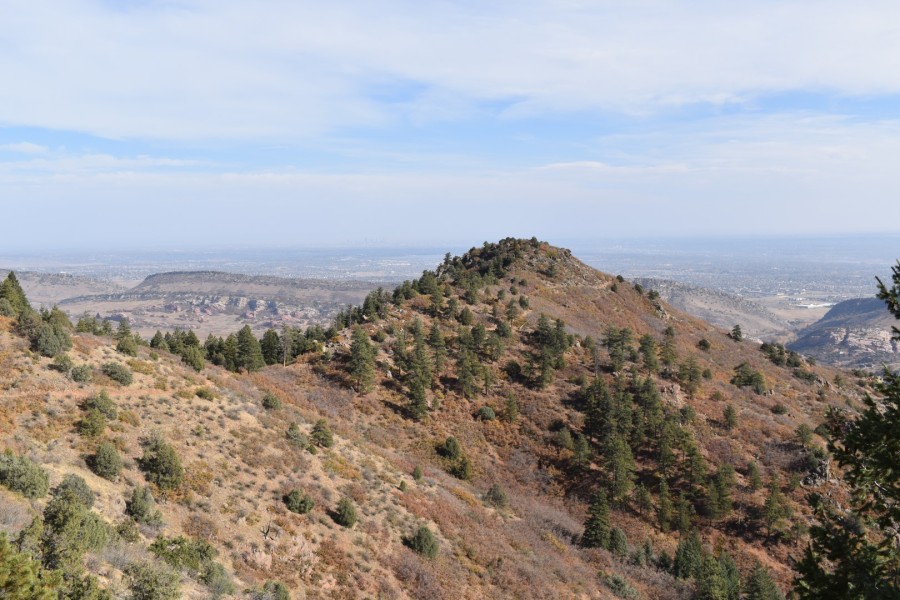 Kyle finally had a full weekend off and was able to hike with me. Early season snows pushed us into the low country and we settled on Bill Couch Mountain in Deer Creek Canyon Park. We’d never been to this park before but the name “Bill Couch” spoke to both of us and quickly became the day’s running joke. Kyle was certain there’d be a couch on the summit!

We set out on the hiker-only Meadowlark Trail just after 9am. This is a slightly longer alternative to the lower section of the Plymouth Creek Trail, the main trail bisecting the park.

The Meadowlark Trail slowly climbs the hillside through stands of scrub and Gambel oak. We often had good views east to the Hogback and at one particularly scenic overlook, we had a beautiful view into Deer Creek Canyon.

After 1.5 miles on the Meadowlark Trail, we reached the Plymouth Creek Trail, which perhaps quite obviously follows Plymouth Creek. Upon reaching the forested creek bed, we lost our warm morning sun and entered a natural refrigerator with drooping, icy foliage. The creek bed may have been dry but everything else was wet and freezing cold.

We continued on the Plymouth Creek Trail for about a mile, passing the busy Plymouth Mountain Loop and eventually climbing away from the creek on an old road. The air warmed as we climbed and soon the forest opened and we could see ol’ Bill Couch himself. We took a right on the Red Mesa Loop and then very quickly another right onto the Golden Eagle Trail.

The Golden Eagle Trail is a 1/2 mile trail that leads to the summit of Bill Couch Mountain. It drops slightly to the saddle and then climbs an easy 120′ to the top.

We had the summit to ourselves. Everyone else was climbing the slightly higher (and forested) Plymouth Mountain. We were happy with our decision even though there weren’t any nice couches to rest on.

When we met back up with the Red Mesa Loop, neither of us were ready to head back to the car so we decided to finish the entire 2.3 mile loop before our descent. There wasn’t much to see along Red Mesa but it was an easy addition without many people. The trail circled through the forest and occasionally crossed a beautiful meadow.

On our way down, we followed the Plymouth Creek Trail all the way back to the trailhead. It was insanely busy and we were constantly moving over for uphill climbers or passing slower groups. We much preferred the near solitude on Bill Couch and Red Mesa. Since we’d started on the Meadowlark Trail, we hadn’t seen the lower section of the Plymouth Creek Trail. It was pretty similar (though steeper) but we did see some interesting rock formations.

We enjoyed our first visit to Deer Creek Canyon Park and were very happy with our less popular hike choice. Eventually I’ll get back to see why Plymouth Mountain is so popular.