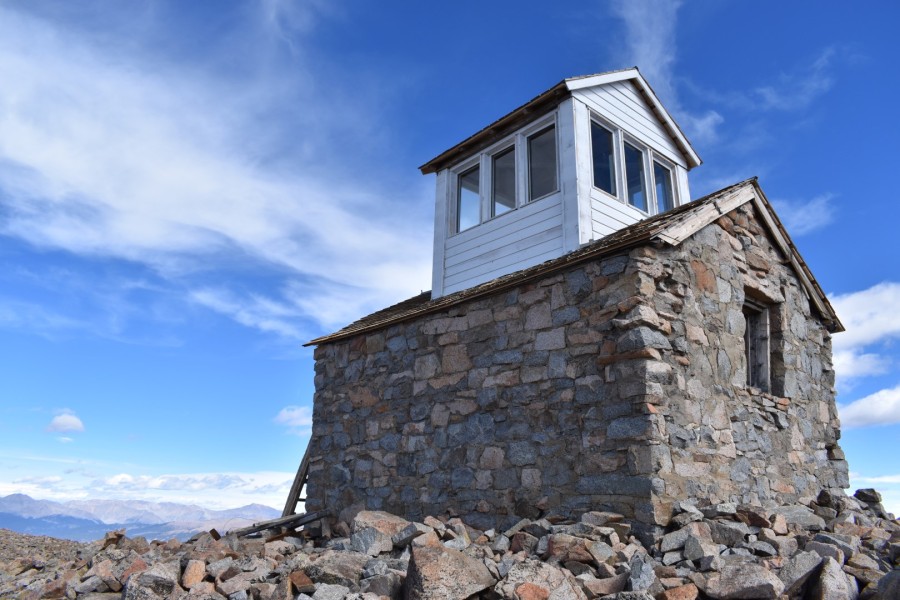 After a big day on Stewart Peak the day before, we decided to sleep in and see if my migraine would go away with a little extra sleep. Thankfully by morning I was feeling much better, and while we now didn’t have time to do our planned hike, Allie did find a shorter route on our way home, Fairview Peak.

We drove the long dirt roads as far as we could in the Jeep Patriot, parking just below the caution sign. Only one obstacle prevented us from driving further, but it was going to be an easy hike so we didn’t mind.

We hiked along the road all the way to its end, just below Fairview’s summit. The weather had called for 40+ mph winds but so far we were lucking out with barely a breeze.

The road led right past the Fairview Mine, which we found worth a stop.

We continued on the road past the Fairview Mine. Eventually we reached the 4wd parking area about 600′ below the summit.

From here, the road turned into an eroded trail which headed straight up the mountain. A cairn marked a better trail around 12,600′ and we cut off and followed this instead.

The trail switchbacked across the steep talus, keeping us at a moderate incline.

Soon we could see the summit and the highlight of the trip.

The last section wasn’t very steep and we made great time, excited to get to the fire lookout.

Fairview Peak Fire Lookout is the highest fire lookout in North America at 13,214′. It was built in 1912, and looked similar to the reconstructed version existing today. The fire watchman had a 360-degree view in the cupola, and could use the installed telegraph line to report fires to the town of Pitkin, 10 miles below. It’s believed the tower was manned until 1916. The start of the World War was most likely the reason the lookout was abandoned.

In the 1960s, the Forest Service converted the lookout into a radio repeater station, removing the cupola and installing grounding wires. This didn’t last long either, as the lightning proved to be too much. In 2008, the Forest Service began restoring the lookout. They spent 6 years fixing the masonry and roof, then rebuilt the cupola in 2015. There are plans for future work as well, and we did find some abandoned supplies inside.

The door was open so we ate our lunch inside, out of the now quite present wind. A rickety step stool system was set up so we very carefully (and one by one) climbed into the cupola to see what the fire watchman once saw.

We spent a long time enjoying the summit and the fire lookout. Fairview was a great way to end a summer of 13ers and will likely remain one of my favorites. When we were ready to head down, we retraced our steps down the trail and then the road, all the way back to the car. Once again, we didn’t see a single other person on trail. It’s always a little extra special to have a mountain to ourselves. We finished the long drive out and back to Denver, reminiscing about a busy summer and wondering what 2021 has in store.