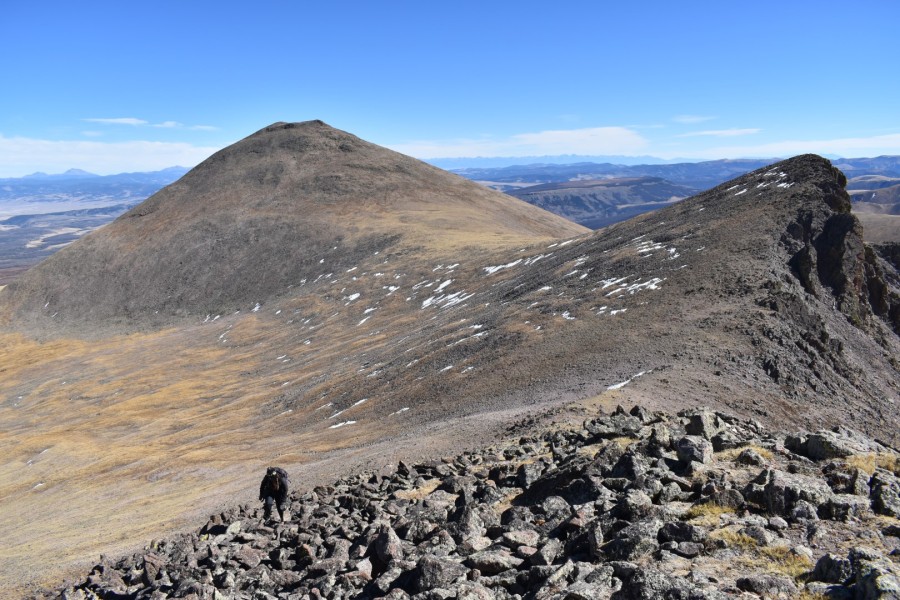 For our last 13er trip of 2020, Allie and I had our sights set on Centennial 13er Stewart Peak. We booked a hotel in Gunnison and drove down Friday night, meeting up with Allie’s mom Peggy who joined us all the way from Kansas. We set out early Saturday morning for the Cebolla Trailhead. There are multiple ways to climb Stewart Peak, but it made the most sense for us to summit Stewart from the north, since we could easily tack on two unranked 13ers, Baldy Chato and Column Ridge. This ended up being a good route decision for us, but it was a long day above 13,000′.

We were on the Cebolla Trail by 8am. The trail leaves the dirt road and switchbacks into the forest above the East Fork of Los Pinos Creek. This area doesn’t seem to get much use. In fact, we didn’t see a single other person all day!

After about a 1/2 mile, the Cebolla Trail left the forest and struck out through a large patch of willows. The willows obscured the trail almost entirely, but occasional tall wooden poles led us through the maze.

Just after the willows let up around 12,500′, we left the trail and hiked directly up Baldy Chato’s slopes. From here, it was about 900′ to the summit on gentle tundra.

From the summit, we had a great view of the rest of our route. Next up was Column Ridge. We followed the long connecting ridge, avoiding some of the larger bumps. It was a long 1.5 miles, I was seriously dragging.

Near the top of Column Ridge, the terrain became rockier. We kept left (east) of the ridge to stay on grass as much as possible. Of the two summits that make up Column Ridge, the westernmost is slightly higher.

Peggy had decided not to summit Column Ridge with Allie and I, instead opting to head directly to the Stewart saddle. We quickly summited and then cut over to the saddle, avoiding the lower, eastern summit.

We found Peggy on the saddle and ascended the last 400′ up Stewart Peak together.

It was windy so we didn’t stay on the summit long. We hiked back down to the saddle and then cut below Column Ridge. We didn’t need to re-summit anything on the way out so we avoided as much unnecessary elevation gain as possible. There was however, about 150′ or so that we needed to regain to get back up and around Baldy Chato. It doesn’t sound like much but it felt like a ton after a long day.

Once up and over Baldy Chato, we retraced our steps back down the slope to the willows. It took a few minutes to figure out where to enter the willows, but eventually we found it and were on our way through the maze and back to the more obvious trail through the forest. We made it back to the car after quite a long time on trail and drove the two hours back to our hotel. I ended up getting a migraine from being up high for so long, so we cancelled our Sunday hiking plans to sleep in instead. We were all hoping I’d feel better after a little extra sleep and could still get one more short hike in on our way home.