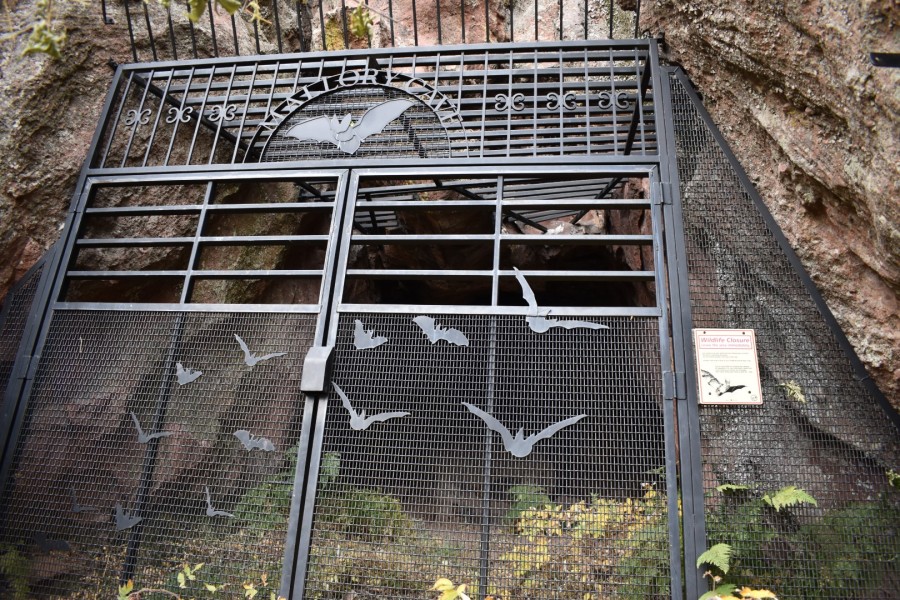 Mallory Cave had been on my list for the longest time, but it’s tricky to plan for. The final section of trail (a rock scramble) is only open October through March, generally the months with the most snow and ice. The scramble is tough to begin with, and with any ice present, it becomes a little too sketchy for me. Kyle and I had hiked as far as we could once, but ice present on the scramble turned us around. A few years later I had the opportunity to return with friends and thankfully we had a nice dry day.

We started from the NCAR parking lot at 8:45am on a Thursday. We followed the NCAR trail about a mile down to the intersection with the Mesa Trail. This section is pretty flat and open.

When we reached the Mesa Trail, we followed signs for the Mallory Cave Trail. It’s another 0.8 miles to the cave from here, and most of the hike’s elevation is gained in this stretch.

We entered the forest and hiked amongst the rock spires of the Flatirons. There is a ton of rock climbing in this area, and as such there are numerous climber’s trails. It was difficult to stay on the main trail but with careful route-finding, we figured it out.

After about 0.8 miles, the Mallory Cave Trail stops at the base of a slanted rock face. A sign points upward. The easy part of our journey was over.

The first section is the hardest. I’ve seen ratings anywhere from Class 3 to Class 4. One move in particular felt difficult since there weren’t many obvious holds, but otherwise it was manageable. Once past this section, there are few remaining obstacles. We crawled through a short tunnel and then scrambled up a second (easier) section. The cave is just past the second scramble, behind the trees in the below picture.

The cave itself is permanently closed to prevent the spread of White-Nose Syndrome to the resident Townsend’s big-eared bats. White-Nose Syndrome is a fungus that is easily transmitted by humans on shoes and clothing, and can kill up to 100% of a bat population.

We were happy to stay out and keep the bats safe, and enjoyed a quick peek into the cave. We couldn’t see very far in and there wasn’t much room to walk around, so the pictures aren’t the best. Admittedly the cave itself is underwhelming, the journey to get to the cave is the best part.

After we were finished at the cave, we made our way back down the scrambly sections. I needed a little help with foot placement on the most difficult move, and I was very glad to have a more confident friend to help! Another solo hiker also needed some assistance so we helped him up and then waited a few minutes for him to visit the cave and climb back down. It’s so much easier with a spotter!

Since this is an out-and-back hike, we retraced our steps down the Mallory Trail and back up the NCAR Trail to the trailhead. This hike might be short, but it packs a lot into just a few miles. Mallory Cave is a must-do hike in Boulder for anyone comfortable making the scramble.