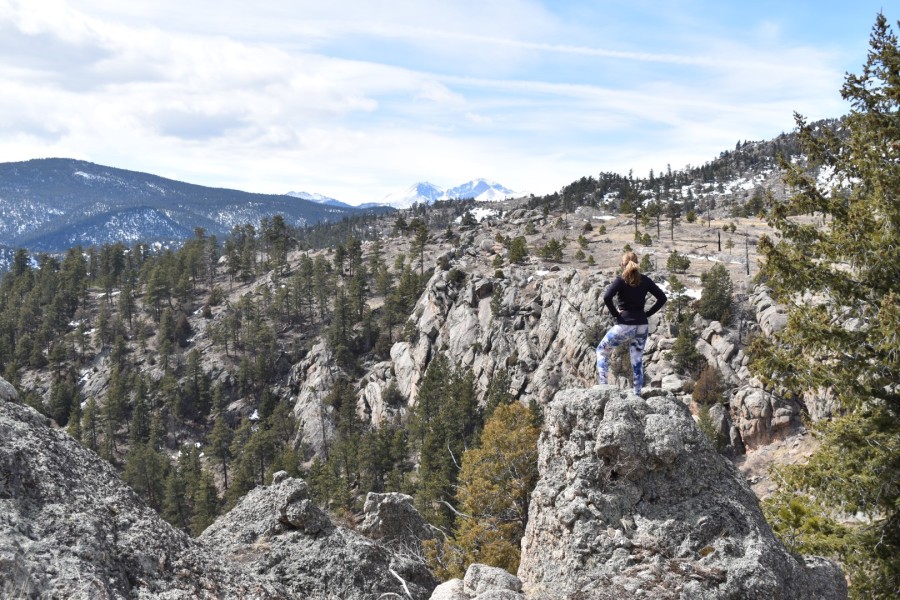 Sullivan Gulch is up the Big Thompson Canyon, one of my favorite places to hike (and close to home!). I somehow convinced Kyle to hike with me two days in a row and we found the tiny trailhead at 11:00 am. There were only 2 cars in the parking area and we took the third and final spot. (Others that came after us parked on the shoulder of the road.)

The Sullivan Gulch Trail is an old trail that is no longer maintained. Thankfully it’s easy enough to figure out, though there are some false trails that lead to campsites, as well as some deadfall along the correct trail.

The trail heads straight up Sullivan Gulch, and I do mean straight up. It ascends nearly 1000′ in just one mile. Even though this trail is short at just over two miles, I definitely wouldn’t consider it “easy”.

We stopped a handful of times on the way up to catch our breath. (Okay, my breath.) Kyle thought he saw something in the forest so we stepped off trail to check it out. We found a huge hole in the ground, probably an old prospect. I don’t think they found anything, this area isn’t known for mining.

A guy sped past us, trekking poles clacking. He had places to be. We did not, so we lollygagged, but I think hiking is more fun when you take the time to really enjoy your surroundings.

Near the top, the trail popped out of the forest and we could see back down into the canyon.

Motivated at being nearly finished, we raced to the top of the saddle. The views were great even though we were only at 7,400′. The trail continued a little higher and we followed it until it ended.

I was shocked that we could see Longs and Meeker from here. I thought we’d be too low, but we greatly enjoyed our unobstructed view. For being such a short trail, this one really packed in some cool stuff.