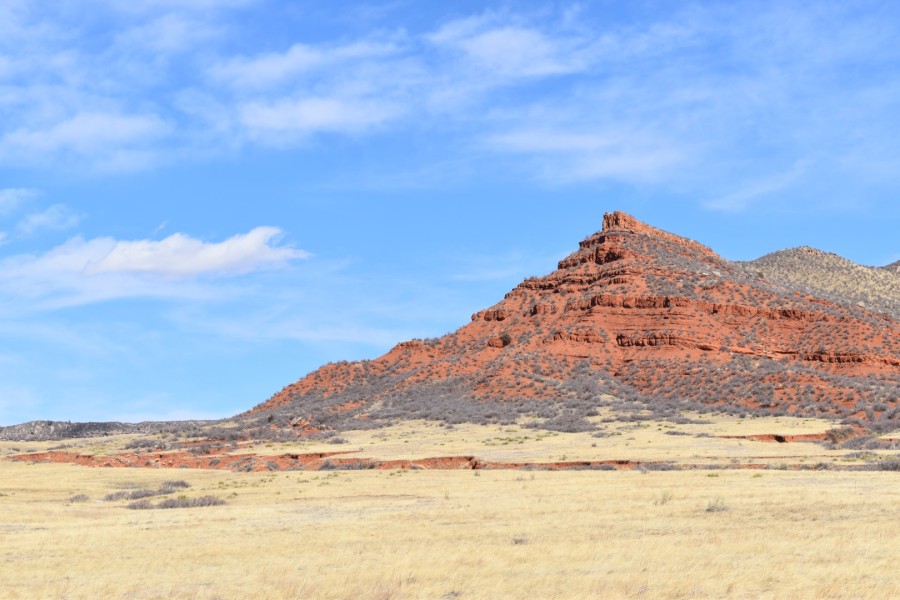 I was looking to try a longer hike to see how my feet were holding up. An easy place to get in some big miles without a ton of elevation gain is Red Mountain Open Space. I found a loop that looked interesting; it traveled through three open spaces and two states. I have never hiked in multiple states on one hike before, how fun!

I arrived at 8:45am and was one of four cars in the lot…well that’s good news! I love hiking in places that don’t have many people. A trail runner parked next to me joked that all of the cars were Subarus (welcome to Colorado!) and then I set off. Dogs aren’t allowed in Red Mountain Open Space or the neighboring Soapstone Prairie Natural Area, so I was all alone. (Obviously the trail runner left me in a cloud of dust.)

Red Mountain Open Space has a large network of trails and I followed a number of different trails as I made my way around the loop. From the trailhead, I followed the Sinking Sun Trail north as it slowly ascends out of the Big Hole.

The Big Hole is a large valley between the plains and the foothills, quite literally a big hole. The area is dotted with canyons, washes, rock formations, and all sorts of geologic wonders that seem impossible for this region.

As I climbed, the views opened up. I don’t think I’ve ever taken so many pictures! From the Cheyenne Rim Trail, you can see the entire Big Hole, the mountains to the west, and the plains to the east.

The Cheyenne Rim Trail eventually moved farther away from the rim and into the grassland. I hadn’t seen a single person (other than the trail runner) all morning, so I had a lot of time to think. The Clovis and Foslom people lived on the plains at the edge of the Big Hole tens of thousands of years ago. Their descendents eventually moved into the canyons, and evidence of their lives can be found throughout this area. I hoped to see this evidence, but most of the locations are protected from the general public and are not located along the trail. It stayed relatively flat for the 3 or so miles I was on top, and I even walked into (and back out of) Wyoming a very short ways. Eventually I descended off the rim and into the north side of the Big Hole.

The descent was a bit steeper and more rugged than my ascent, but I really enjoyed looking down into Ruby Wash, where I was heading! After my steep descent, I turned right on the Ruby Wash Trail and followed it for 2.5 miles as it worked its way through red-walled canyons and open wash.

I’ll admit that I wasn’t expecting a Sedona-esque canyon, and I was VERY excited to find this! I even checked my GPS just to make sure I didn’t somehow teleport to Arizona. (I didn’t.)

I wandered through the canyon for quite some time, finally seeing people after hours of solitude: tons of horseback riders! As I walked south, the canyon walls dissipated, opening up to a very wide, dry wash.

The Ruby Wash Trail pulled out of the wash just as it neared a flowing creek. Back on the plains, I had gorgeous views of the surrounding red rock foothills.

Nearing the trailhead, I came upon dozens of people hiking the two mile Bent Rock Trail loop. This seems to be the busiest trail in the park, and for good reason. I didn’t complete the full loop (just a very short section to get back to the trailhead) but it was absolutely gorgeous! As if each thing I’d seen already wasn’t just as spectacular, I oohed and aahed over everything. This is an interpretive trail, so I also learned a good bit about the area’s geology.

After stepping aside for what felt like hundreds of people, I finally found my car amidst dozens of others. A little busier now! But what a beautiful place for a long hike, the varied terrain keeping me busy the entire time. I will absolutely be back to finish up the remaining trails.