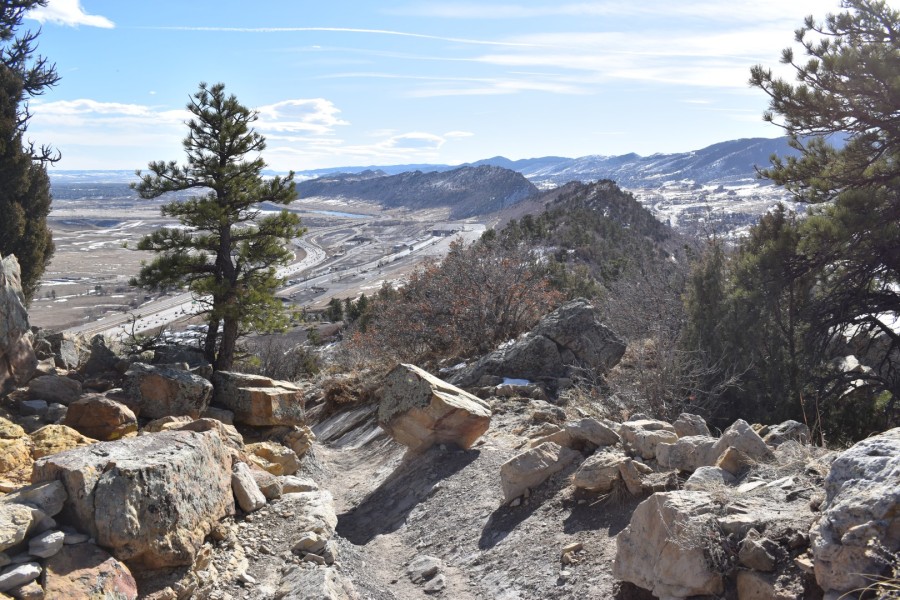 On Saturday, Allie and I went for a hike before I had to pick up my newest foster dog in Denver at 2:30. Now that winter’s set in to the high country, we’re no longer climbing a new 13er every weekend, so we’re working through a list of low elevation hikes to get us through the winter.

Matthews/Winters Park is right at the junction of two major highways, so although it’s been on my list for a while, I’ve avoided it expecting it to be busy, loud, and not really that cool. But Allie and I learned about a trail in Matthews/Winters Park that might just be cooler than I’d expected.

We parked at the Stegosaurus Park-n-Ride and crossed the road to get to the main Matthews/Winters Park Trailhead. From there, we followed the Village Walk and Red Rocks Trails through the western half of the park.

These trails paralleled the base of the foothills, staying mostly flat and easy. The miles flew by as we sped through this section.

If you can believe it, we encountered numerous red rock formations along the Red Rocks Trail.

We followed a short section of the Dakota Ridge Trail and popped out on W. Alameda Pkwy. This section of Alameda is closed to cars and is used for bus tours of the Dinosaur Ridge fossil beds. But the area is open for walking so we walked down the road a short ways so Allie could see the fossils. (I’d done a bus tour with my family a few years ago and it is definitely worth the $8 bus trip and tour guide. Each stop has an interpretive sign explaining the type of fossil, but a tour guide can give so much more information!)

After visiting the fossil beds, we walked back up the road and continued along the Dakota Ridge Trail. We climbed up one bump just to hike back down and climb up the next one. There were probably 4 or 5 major bumps along the ridge that we had to climb.

The trail was mostly gradual with just a few short, steep sections. We had to contend with some ice, but never enough to need microspikes. Eventually we summited the last bump and descended to the car. A fun morning on a cool ridge!