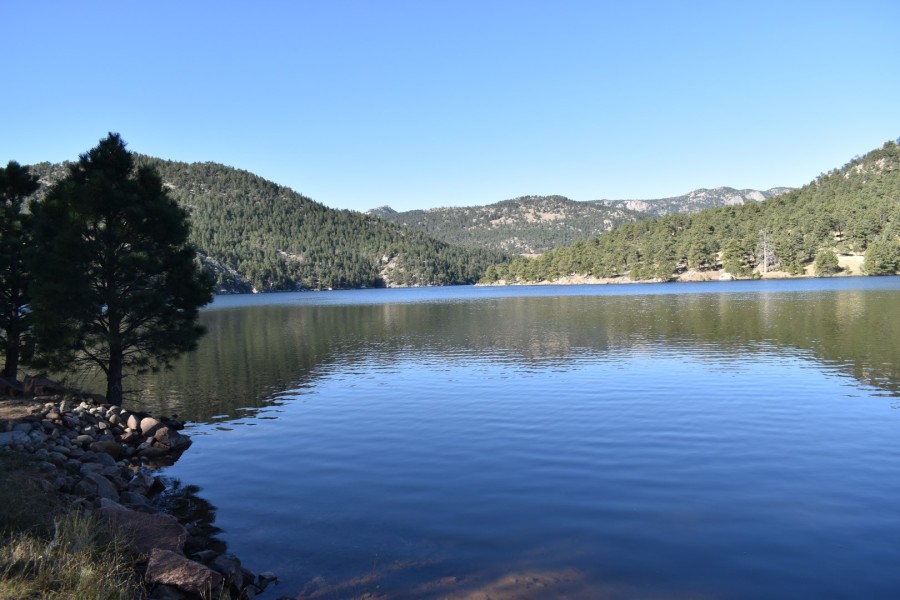 On AllTrails, this one is called Button Rock Dam via Sleepy Lion Trail. The dam, while quite large, isn’t (at least in my opinion) the most interesting part about this hike, and the Sleepy Lion Trail is only 2 miles of the more than 5.5 mile loop. So I hereby propose to rename this hike Ralph Price Reservoir, which I believe is the hike’s true destination.

But anyways, Tori and I set out along the gravel service road, which is the first portion of the hike. I’ve said it before and I’ll say it again: I don’t typically like road walking. But the scenery along this particular road made me forget all about what I was walking on.

We came upon the first dam on Longmont Reservoir, wondering if we’d already hit Button Rock Dam. But a nearby sign informed us otherwise so we moved on. There weren’t many people hiking yet, so we enjoyed the morning reflections all by ourselves.

We continued along the road, following North Saint Vrain Creek as it gradually winds its way up the canyon. After a mile of road walking, we passed the junction for the Sleepy Lion Trail, but we decided to continue along the road and take the trail on the way back. (It doesn’t matter much either way, but it seemed like most people go the opposite direction.)

As we continued along, we heard a dog continuously barking. Now obviously I like dogs (I’d even brought my dog Bob along today) but excessive barking is ridiculous. We looked around and found the culprit, a young dog playfully barking and jumping up on his or her owner. And the owners were doing NOTHING! I couldn’t believe it. And it’s not like it was just a few barks here and there, it was constant barking for 20 minutes!!!

We came to a junction in the road and my map told me to go left, but there was an alternate route to the right. Hmm, which way is the barking dog going? We took a gamble and figured they’d take the standard route on the left, so we went right. And as it turns out that was correct! Thank goodness for a quiet hike once again! And another bonus, this route was GORGEOUS! Way better than the standard route by far, and not any longer.

We crossed a really cool ravine on a huge bridge. I imagine when there’s more water flowing, this spot is really scenic, and maybe even a fun spot to swim! After climbing up the road a bit more, we discovered why there was no water in the ravine. The water levels were just below the top of a concrete spillway, preventing any water from coming down that channel. (All of the water is directed to come out of Button Rock Dam, the spillway appears to just be for flood control.)

We were now at the reservoir, and it was truly gorgeous. Bigger than I was expecting and so blue.

We followed the road around the reservoir to Button Rock Dam (and wondered what in the world is Button Rock.)

From the top of the dam, a rocky trail descends back down to another road (the standard route). The Sleepy Lion Trail also dumps out here so we headed towards it. On our descent, we could hear a thunderous noise like a waterfall. Oh cool, a waterfall!

Not a waterfall, but an outlet pipe at the dam, spewing forth water at an alarming rate. I’ve never seen such high pressure before! Super cool. The Sleepy Lion Trail ascended a ridge, and we soon got to see Ralph Price Reservoir from up high, as well as Longs Peak!

We were glad we’d saved the Sleepy Lion Trail for last even though it packed nearly all of the elevation gain in it’s 2 miles. The views were the best of the hike and were a fun reward. The trail was mostly forested and we were surprised to come upon a large meadow. There’s something about walking through a meadow after being in the forest that is truly magical. I really enjoyed this section. From here it was just a forested descent back to the road and then an easy mile back to the car. A simple but rewarding hike!