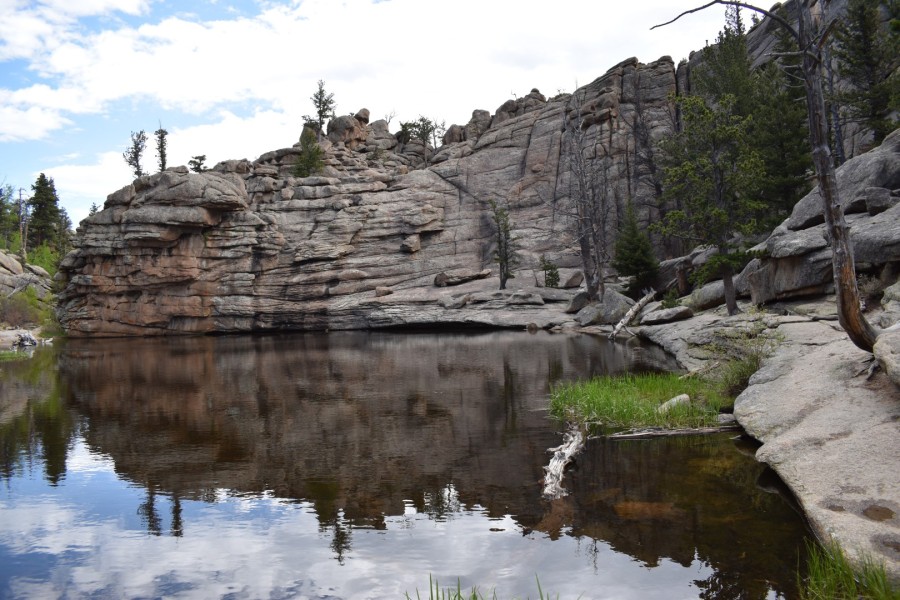 My friend Tori and I got together for another Sunday hike. She only has one day off each week and I’m always excited when she chooses to spend that day with me! We had a few other things planned for the day, plus the weather forecast wasn’t looking great after 10am, so we picked a short hike that we could easily get done in time.

We arrived at the trailhead just before 8am. The parking lot was less than half full so we had no trouble finding a spot. The trail is within Rocky Mountain National Park, but you don’t actually drive into the park to get to this trailhead, so you don’t have to pay the park fee!

There are a number of different trails at the Lumpy Ridge trailhead, but we followed signs to get to Gem Lake. We followed the great trail through the Lumpy Ridge area (we can confirm that it was very lumpy). Along the way were numerous overlooks and neat rock formations that were worth a quick stop.

Much of the trail was stairs, which is always a tough workout. (I hate stairs!) We took our time ascending and admiring our surroundings.

I had read a review on AllTrails that Gem Lake is underwhelming. What does that mean exactly, for a lake to be underwhelming? I’m pretty sure I’ve never seen a boring lake, but I guess you never know! We came to a wet area on the trail and crossed on a fun log. We wondered if this was the “lake” the review mentioned. I suppose if you thought that this puddle was Gem Lake, you might be pretty underwhelmed.

Our hikes are always full of jokes, most of which are only funny to us.

There were a number of different wildflowers along the trail, two of which I’d never seen before. I looked them up and identified them below. (Click on the picture to enlarge.)

We were really enjoying the trail so far. Cool rock formations and gorgeous views are some of our favorite things. This hike sure checks a lot of boxes! We just didn’t know what Gem Lake would be like. Would it actually be underwhelming?

We climbed up a section of rock and then all of a sudden the “Gem Lake” sign came into view. We’re here! We walked a few more steps to reach the edge of the lake. The few people enjoying the lake left shortly after we arrived. Awesome, we have the place to ourselves!

Gem Lake was small, the size of a pond, but I would not say it was underwhelming. Bedrock and cliffs bordered two sides of the lake and provided a stunning backdrop. The reflections were also on point. How could this not be enjoyable?

The trail continued on but Gem Lake was our final destination. We hadn’t been hiking long enough to need a snack so we just stood around for a few minutes until the chipmunks started begging for food. One female was very bold in her begging. She really had the cuteness factor turned up! I enjoyed photographing her but we didn’t indulge her with any snacks. It’s never a good idea to feed wildlife!

Our hike back down was rough on the knees (stairs!) but went by quickly. As we got closer to the trailhead, tons of large families were making their way up the trail. Kids and parents out for a Father’s Day hike! I love to see people take their kids hiking, but there were just SO MANY people that we were glad to get back to the car and get the heck out of there!

We finished up our day with lunch in town and a drive through Rocky Mountain National Park before we had to get back to Loveland for our nail appointments. We were really glad we took a chance on an “underwhelming” hike.