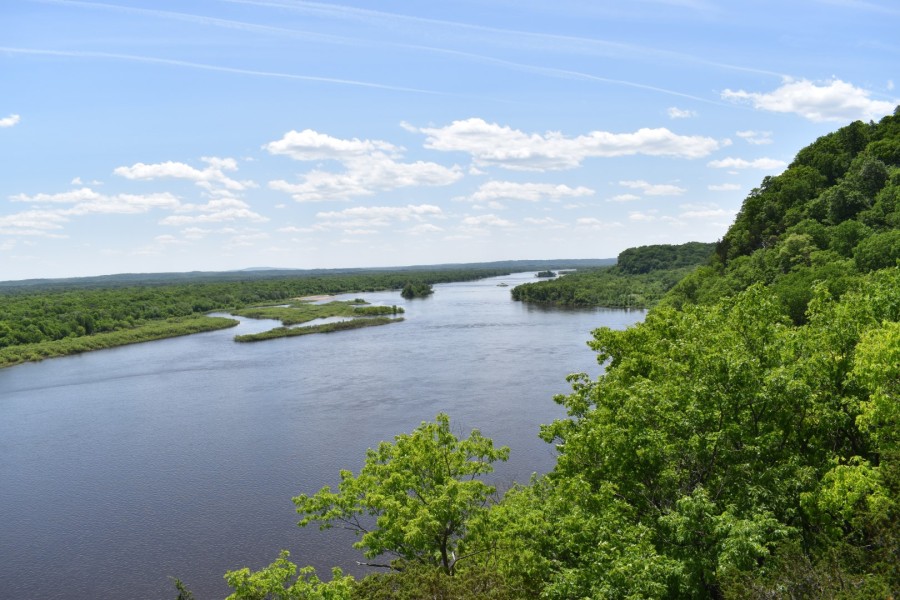 On day 2, we went on a few hikes that my dad had recommended. My brother had done them all with my dad before, but Kyle and I hadn’t done any so we were excited to check them out! They are all in different natural areas in southern Wisconsin, so it was fun to see three completely different spots.

Our first stop was Parfrey’s Glen, Wisconsin’s first state natural area. I’d heard that this hike is pretty popular, so we got there as early as possible to secure a parking spot. (By the time we got back an hour later, the lot had already filled and a dozen cars were parked down the road.) The trail started out nice and wide along Parfrey’s Glen Creek.

The trail eventually became more narrow, crossing the creek multiple times. The creek was higher than normal, so most of the crossings were wet. In some areas the trail was completely underwater.

Every rock face was covered in a layer of moss, and ferns dotted the walls while the typical hardwood forest of southern Wisconsin towered above us, camouflaging the ravine from above. This area is so unique, it’s no wonder it was made a state natural area!

We eventually came to a cascade and a small pool. The trail continued on but the water was deep and I wasn’t comfortable crossing on wet logs, so we turned around. Nicholas mentioned that the true end of the trail wasn’t as cool as the cascades, so I was okay with my decision.

Our next destination was Gibraltar Rock. By car, Gibraltar Rock isn’t that close to Parfrey’s Glen, but there is a free ferry that takes you across Lake Wisconsin in about 5 minutes, making the trip much shorter! Since it was only mid-morning, there weren’t many people in line for the ferry and we were able to sneak on right away. Kyle had never been on a ferry before, so it was fun watching him experience it.

After the ferry, we made our way to the Gibraltar Rock parking area. And it was PACKED! We parked along the road and walked in to the trailhead. There is a narrow road that goes all the way to the top of Gibraltar Rock as well as a hiking trail. We decided to take the road up and the trail down, making a sort of loop.

Even though it was a steady climb, we made good time and soon found ourselves at the first overlook area. I found this spot to have the best views of the many overlooks we stopped at.

After a relaxing time at the summit, we made our way back down to find some lunch!

We stopped for lunch at the very first ever Culver’s in Sauk City. (Somehow Culver’s always tastes better when I’m in Wisconsin.) After lunch, we made our way to Ferry Bluff, which is just outside of town.

This area of Wisconsin is called the Driftless Area, which means that it has it’s natural topography and wasn’t flattened by the continental glaciation. That’s why we have so many beautiful bluffs like Gibraltar Rock and Ferry Bluff.

The Ferry Bluff Trail starts out along the Wisconsin River. Ferry Bluff is named for the ferry that operated at the base of the bluff in the late 1800s. This ferry wasn’t as fancy as the ferry we’d taken earlier in the day, as this ferry was pulled by a guy in a rowboat.

With all of the flooding, the water is much higher than normal and the mosquitoes were TERRIBLE. It was like walking through a cloud of bugs.

After a short, flat section along the river, the trail climbs steadily to the summit.

Even though the trail wasn’t very long, we passed through a number of different ecosystems. The riverbottom, a lush forest, and a sandy/rocky overlook that I was told normally has tons of cactus growing on it (though we didn’t see any). The views of the Wisconsin River from the overlook were absolutely amazing, and we spent a good amount of time enjoying them. The edge was a cliff that dropped a few hundred feet down to the water. Kyle threw a rock out over the river. It took a long time to hit the water.

We only had one more day left in Wisconsin, and we were excited for what was in store!

Jump back to Part One or jump ahead to Part Three of our Wisconsin trip!