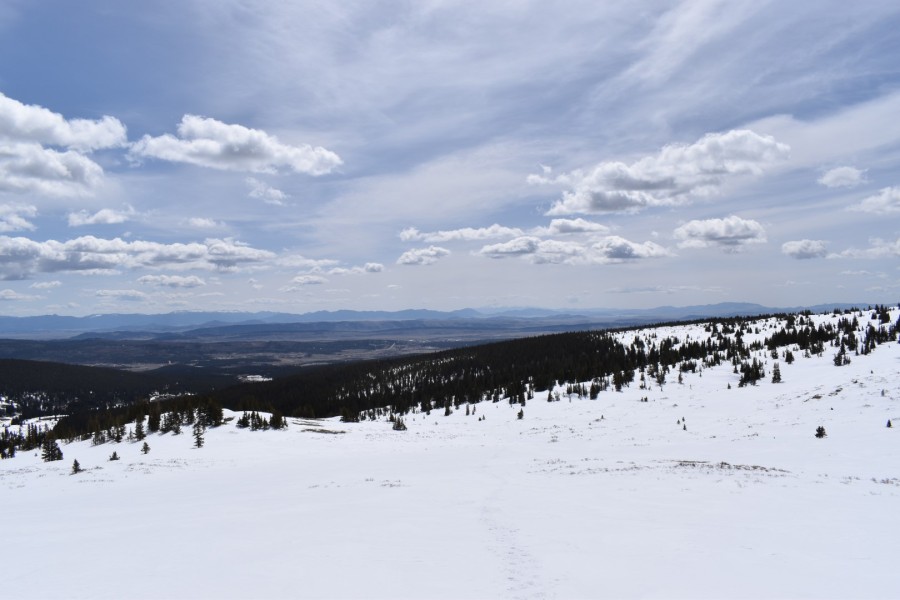 Kyle and I set off for Pennsylvania Mountain, fully intending on summiting. However, today would not be the day for us. The hike shouldn’t have been difficult, at just under 6 miles and 1600′ of gain. But in some ways, we were just underprepared. Situations like this, where we have to turn around before finishing, are always rough for me, but we did learn an awful lot from the experience!

Pennsylvania Mountain is just outside of Fairplay, so after a nearly 3 hour drive we were winding through the mountain neighborhood almost to the trailhead. We were aiming for the Pika Trailhead, which I’d heard was accessible in the winter. The summer parking area was not, but they did have 2 spots plowed right off the road, and even at 9am, we were the only ones there!

We strapped on our snowshoes and clambered up the pile of snow marking the plow line. We soon realized that there weren’t any other tracks besides our own. No one had been up here in awhile! We followed the snow covered road back to the main Pika Trailhead, where we found a brand new trailhead sign. The snow had drifted through the trees so the trail wasn’t obvious, but blue diamond markers showed the way!

Shortly after we began, we lost the trail markers, and even on the way down could NOT see the next marker. What could have happened to it? Vandalism? A storm knocked the marker tree down?

Even without the markers, we knew which direction we needed to head. To climb Pennsylvania, you start out along the Pika Trail and then eventually turn off onto the tundra and follow the ridgeline up. Because we lost the Pika Trail so early, we ended up turning off much sooner than we should have.

We could occasionally see Penn’s ridgeline through the trees so we aimed in that general direction. We crossed a few steep snow drifts and realized our snowshoes weren’t cut out for mountaineering. They are more general purpose, and while they did fine overall since the route is mostly gradual, the steeper snow drifts were a bit more difficult.

The snow was pretty stable, even on the way back down, and while we were glad we had our snowshoes, we didn’t have any trouble with postholing.

We were getting fatigued sooner than expected and started to contour around instead of ascending further to head towards what we thought was the summit. As we climbed higher, we could see a well packed trail further up the ridge from another access point I’d heard of. Looks like everyone goes that way instead!

We made it up to about 12,275′ and took a quick break on some rocks to clean ice balls out of our snowshoes.

I checked the map again and realized we were still about a mile and 700′ from the summit. Seriously? We’d barely even gotten anywhere and we’d been moving for forever! We were about 30 minutes from our turnaround time (to make it to a family dinner that night) and with our snail pace there was NO way we could summit in time. DAMN!

We made the difficult decision to turn around and try again another day. On the way back down, I all of a sudden had a terrible headache and was lightheaded. All I wanted to do was lay down in the snow and go to sleep. These are all signs of altitude sickness so I downed some water and headed down as quickly as I could. It’d been a long time since I’d been up this high and I was feeling it!

As we descended, I started to feel better so we stopped to take pictures with the dogs.

Even though we weren’t successful in summitting today, we did learn quite a bit and won’t make the same mistakes again!

So what’d we do wrong?

I’m still getting over the burn of not being able to summit (and also a mild sunburn LOL!) but sometimes we have to learn things before we can be successful.

I hope you all had a great weekend and were safe and successful in your endeavors!