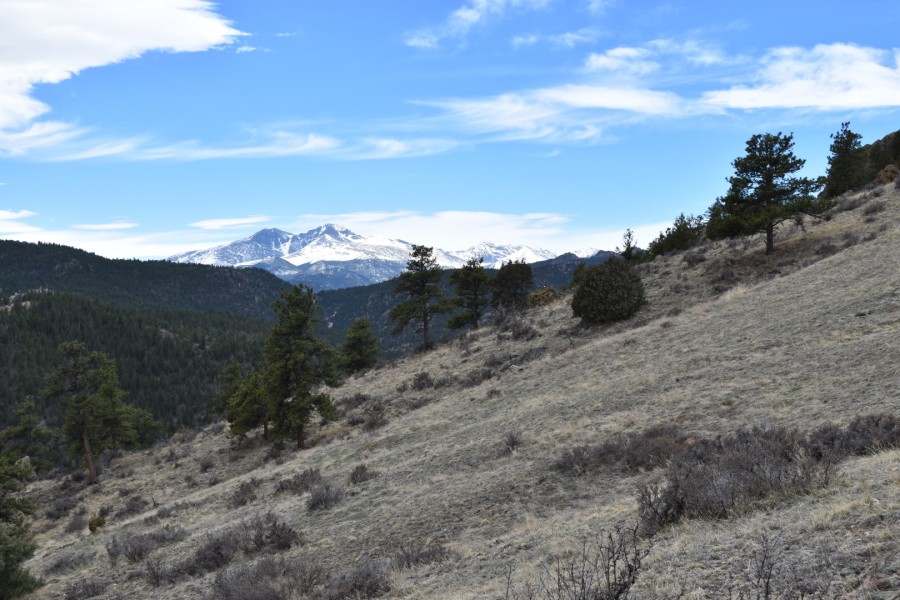 It’s been a hectic few weeks. A family member went missing (thankfully they’re now home safe) and then I had a headache that has lasted for 5 days (unfortunately it’s not going away so I’ve made a doctor’s appointment for later this week). I didn’t end up going hiking at all last weekend just because of everything that’s going on, and with my headache and Easter this weekend, I was worried I wouldn’t be able to go again! But on Saturday I decided to do a short hike that was close to home, so as not to anger my head TOO much.

Triangle Mountain is one of the few hikes that I had left to do in the Big Thompson Canyon. I’ve really enjoyed hiking in this area. It’s a great spot to visit while waiting for winter to be over at higher altitudes.

From reading reviews on AllTrails, and a little investigating on Google Maps Street View, I knew the trail would be hard to find. I knew it wasn’t marked, and I couldn’t see it on Google Maps, so I was prepared to hunt a little. I downloaded the AllTrails map ahead of time since I knew I wouldn’t have phone service, and used that as my guide.

The trailhead is an unmarked pull-off in the canyon. Google Maps showed a nice parking area with a bathroom and picnic area but it’s not there now. I’m guessing it was washed away in the big floods a few years back. I actually missed the turn at first because I was looking for an actual parking lot, and had to turn around. But eventually I found the right spot, and I was the only one there!

As I got closer, a trail became visible. Yes, I found it! It’s extremely hard to see in the above picture, but it starts just below the lowest pine tree, just right of center.

The trail started out very steep, and Toby and I clambered up. I was glad that it was dry. I can’t imagine what that slope would have been like wet or icy!

One benefit of the trail climbing so quickly is the views of the canyon came quickly as well. Shortly we were out of the forest and on a mostly open slope.

The trail occasionally took me through through patches of trees, but most of the hike was open. It was often difficult to follow the trail, and it was obvious not many people get up this way. Much of the trail is covered in grass, but luckily there were cairns in particularly challenging spots.

The trail was so steep that I felt like I was stopping to catch my breath every 10 seconds. At one point I looked up and saw a little face looking at me. I told myself it was just a rock or a log or something because the face wasn’t moving. But I looked again and it was a bighorn sheep!

I couldn’t believe that he was just sitting there looking at us, perfectly still! And Toby didn’t even notice him (his eyesight isn’t very good.)

As we climbed higher, the terrain opened up a bit more and we started to see better and better views.

Most everything was still brown, but pasqueflowers were just blooming! They are the first sign of spring. There was also a large amount of ball cactus and I thought to myself how beautiful they are when they bloom. Someone will be very lucky to see their hot pink flowers!

After staring at the ground for a while, I happened to look up and saw Longs & Meeker watching me.

I don’t think I looked back at the ground after that.

When planning my hikes, I try to visit different areas each time. This is to give myself different things to look at – different views and maybe even different ecosystems.

If you’ve been following me for a while, you might remember my post from 2 weeks ago when we hiked up Crosier Mountain. Triangle Mountain and Crosier Mountain are very close to each other, so you may recognize the views of Longs & Meeker as well as the Big Thompson Canyon.

There were signs of recent forest thinning happening in the area, though I couldn’t figure out why since it didn’t seem like there were very many trees to begin with.

As I neared the summit, the trail became more and more difficult to follow in the grass.

But the views kept opening up.

After multiple false summits, I finally made it to the top! At first it looked like some scrambling would be involved but the trail led around the side of the summit block and I was able to walk up to the top.

After taking in all the views, I started to look for a spot to sit and have a snack. And then I found the summit register! I spent a few minutes looking through the entries. The most recent was from February, over 2 months before! And the earliest entry was from 2006!

I signed myself and Toby in, and then he begged for some snacks.

After our snack break, we packed up and set out for the car. I assumed I’d be able to speed walk down, but the trail was so steep that I had to watch each step. However, I did see a few ball cactus blooming! They had bloomed in the short time that I was on the summit, just for me it seemed!